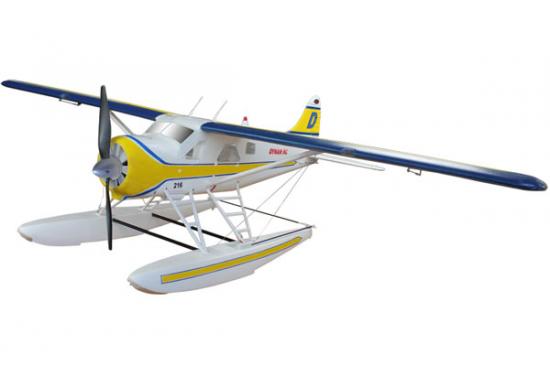 DHC-2 Beaver is a single-engine, high-wing, propeller-driven STOL aircraft. It is used for cargo, passenger hauling, aerial application, and has been widely adopted by armed forces as a utility aircraft. Produced from 1947-1967 by de Havilland Canada. The United States Army purchased several hundred; nine DHC-2s are still in service with the Civil Air Patrol for search and rescue. The Royal New Zealand Air Force used the Beaver for expedition to the South Pole.

Dynam has replicated the plane into this beautiful EPO model and features plenty of scale details. With a total of five LEDs on factory fitted on the plane, two LED on each wing and one on the fuselage night flying is possible . Included in the box is conventional landing gear and a set of floats for taking off and landing on water. The floats include dual steerable rudder which provides excellent control on water. The Beaver is flap ready from the factory, all you have to do is install the servos and linkages and make the appropriate cuts to the wing.

Pick up this latest semi-scale beauty from Dynam from your local hobby shop today.

This does not incldue a battery. However, on a 2200 4S we'd estimate around 15 mins or so depending on your flying style.

These are foam construction