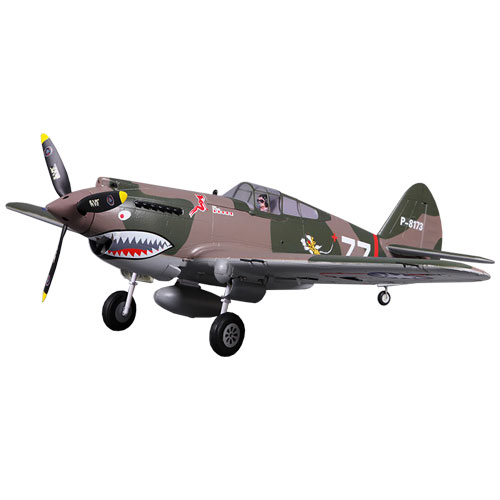 The Curtiss P-40 Warhawk was an American single-engined, single-seat, all-metal fighter and ground-attack aircraft that first flew in 1938. The P-40 design was a modification of the previous Curtiss P-36 Hawk which reduced development time and enabled a rapid entry into production and operational service. The Warhawk was used by most Allied powers during World War II, and remained in frontline service until the end of the war. It was the third most-produced American fighter, after the P-51 and P-47; by November 1944, when production of the P-40 ceased, 13,738 had been built.

The Flying Tigers consisted of three fighter squadrons with about 30 aircraft each. It trained in Burma before the American entry into World War II with the mission of defending China against Japanese forces. The group of volunteers were officially members of the Chinese Air Force.

The Tigers' shark-faced fighters remain among themost recognizable of any individual combat aircraft and combat unit of World War II, and they demonstrated innovative tactical victories when the news in the U.S. was filled with little more than stories of defeat at the hands of the Japanese forces.

The group first saw combat on 20 December 1941, 12 days after Pearl Harbor. It achieved notable success during the lowest period of the war for U.S. and Allied Forces, giving hope to Americans that they would eventually succeed against the Japanese. They are officially credited with 296 enemy aircraft destroyed.

The 2nd of FMS's mighty 980mm series aircraft has arrived! The P-40B is, like the 980mm P47,is definitely a head turner! If you love warbirds and enjoy the excitement of

heart-pounding speeds,this aircraft will satisfy both of your desires! The stock 3 bladed props, 3648 brushless outrunner, 4 cell battery and 70A ESC means that the P-