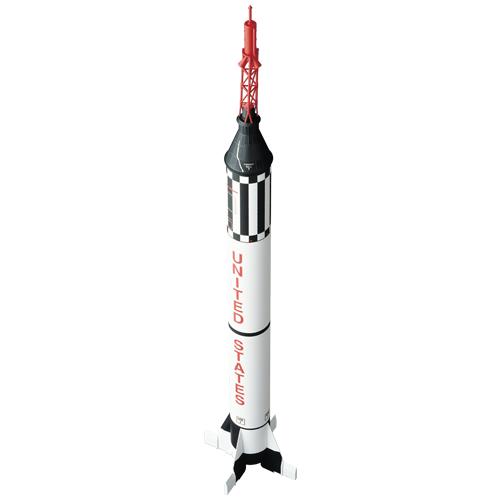 When Gus Grissom climbed into the cockpit of his Mercury spacecraft on the morning of July 21, 1961, he was ready for an adventure. Grissom's Mercury mission (MR-4) was the second of the series, and like Alan Shephard before him, it was a sub-orbital lob. The Redstone rocket would take Gus and his spacecraft, dubbed Liberty Bell 7, above the atmosphere, but not quite fast enough to achieve orbit. The launch was on time and perfect, as was the short period of weightless flight, and re-entry through the atmosphere. Liberty Bell 7 deployed its main parachute as expected and landed within two miles of the Navy recovery team. Gus secured the spacecraft and waited to be rescued. However, without warning, the explosive hatch blew off and the spacecraft begin to take on water. Grissom escaped but nearly drowned in his spacesuit. Liberty Bell 7 filled with seawater and sank to the bottom of the Atlantic. It was the only NASA spacecraft ever lost at sea.

The Estes Mercury Redstone is an impressive 1:34 scale model of the historic NASA spacecraft and rocket. The finished kit stands nearly 29 inches tall and features laser-cut, layered balsa fins and a molded plastic model of Grissom's Liberty Bell 7 and it's Launch Escape System (LES). The set of detailed water-slide decals even includes the distinctive white €œcrack€ that Gus painted onto the side of his spacecraft to make it resemble the actual Liberty Bell. This Advanced Level (formerly Skill Level 3) kit is a €œmust have€ for all serious model rocketeers! Put this one on the flight line and countdown to launch, and watch it reach altitudes up to 200 feet on an Estes C6-3 engine. Rocket and spacecraft return together under a colorful 15 inch parachute, ready to prep and launch again.

As for the real Liberty Bell 7, in 1999 after resting silently beneath the Atlantic for 38 years, a recovery team located and raised the spacecraft from its 16,000-foot depth. Now restored, Gus Grissom's once lost spacecraft is on display in a Kansas museum, a tribute to the memorable, early days of the U.S. space program.