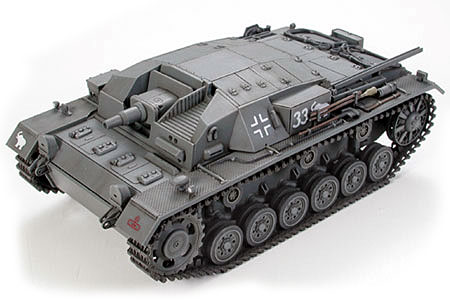 Out of stock : Expected August 15th

Tamiya presents our first ever model of the Sturmgeschütz III (Stug III) Ausf. B to the 1/48 MMV Series, making this tracked vehicle a truly MMV original. The much talked about MMV Seriesjust continues to get better with a growing range of original subjects.

About the German Sturmgeschütz III Ausf. B

Germany’s versatile Stug III was originally designed as an assault weapon, however alsocame to be used as a weapon of defense as the war progressed, providing both assault gunand anti-tank support. Based on the durable Panzer III chassis, the Stug III featured a monoblockstructure with an L24 75mm short barreled gun mounted directly to the hull, eliminating therevolving turret and reducing overall height. The Ausf. B was the first truly mass producedStug III with 250 produced from June 1940. Featuring wide tracks and powered by a 230hpMaybach HL 120 TRM engine the Ausf. B boasted a top speed of 40km/h. The Ausf. B sawaction during the Balakans campaign in April 1941 and Operation Barbarossa in June, 1941.The simple construction leading to low costs and easy mass production made the Stug III oneof Germany’s most produced armored vehicles with over 10,000 produced during WWII.