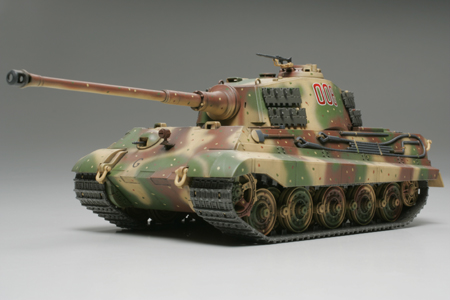 Out of stock : Expected August 3rd

180mm thick armor and powerful 88mm gun of the King Tiger struck fear in the hearts of allAllied troops that had the misfortune of facing this beast. This kit realistically replicates theproduction type tank with angular Henschel turret. The1/48 scale King Tiger is the perfectcenterpiece for a diorama depicting late WWII battles, such as the Ardennes front.

In order to counter the increasing threat of Russian tanks during the latter part of WWII, Germanybegan developing a new heavy tank, the King Tiger. The first 50 models featured a Porschedesigned turret, however in mass production runs a Henschel design turret was adopted.Designed for defense and attack, the King Tiger featured thick 150mm armor on the front and80mm armor on the sides, and a 88mm L71 high velocity main gun capable of penetrating170mm thick armor at a distance of 1,000m. Auxiliary armament included two 7.92mm machineguns mounted on the front hull section and on the turret. The extremely thick armor on the turretfront measured 185mm and 88mm on the side panels.This massive tank was driven by a 700hpMaybach HL230 P-30 12 cylinder liquid cooled engine.