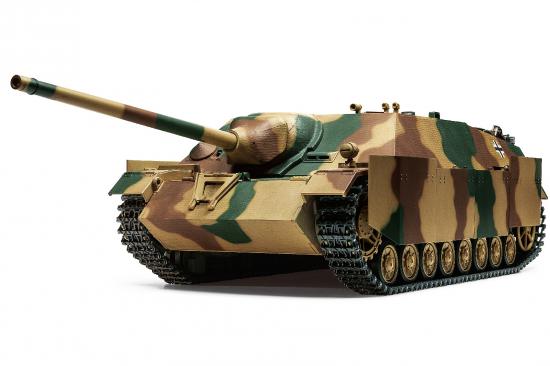 Take Control of a Fearsome Tank Hunter
This is a 1/16 scale R/C model assembly kit of the Jagdpanzer IV Lang /70(V), an L/70 7.5cm gun-toting German tank destroyer that proved a fearsome opponent for allied armored vehicles after its appearance near the end of WWII. The smartly-sloped, low form is recreated with aplomb, and separate parts are included to accurately depict Schürzen armor, tools, spare track links and other accessories. A sturdy base is provided by the chassis with numerous metal parts. Pair this model with a separately sold 4ch R/C system to take control of a whole range of tank and gun ments, with highly realistic sounds synchronized with the model's actions, not to mention gun recoil, vehicle kickback and more. Take it a step further, and add the separately available Tamiya Battle System to have mock battles with other Tamiya R/C tanks.

Main Gun Fires with Ferocity
A precision made aluminum gun barrel accurately reproduces the main gun which protrudes from the distinctive 窶彜aukopf窶 mantlet. When firing, main gun roars and muzzle flashes thanks to a flashtube in the barrel. The barrel recoils after firing via the fighting compartment interior gearbox, and then returns smoothly to the original position. Vehicle kickback is also recreated by the drive gearbox.

About the Jagdpanzer IV /70(V) Lang
Despite fighting in a losing cause, the German Jagdpanzer IV Lang /70(V) and its L/70 7.5cm gun quickly proved a fearsome opponent for allied armored vehicles after its appearance near the end of WWII. Like its L/48 7.5cm shorter-gunned predecessor, the Lang used the tried and tested Pz.Kpfw.IV chassis with a smartly-sloped covered fighting compartment on top. It was dubbed 窶廰ang窶 (German for 窶徑ong窶 to differentiate it from the L/48 gun variant, with /70 denoting the caliber and (V) its manufacture by the company Vomag. 930 Jadgpanzer IV /70(V) Langs were produced between August 1944 and March 1945, and fought with tenacity in actions such as those along the Ardennes front from December 1944, their exceptional range and power troubling Allied forces until the last.

- Gun offers 12°elevation and 4°depression, with movement controlled via a 4ch transmitter.


- 24°of traverse is also controlled via transmitter, with the sight cover sliding in simultaneous movement.


- Machined aluminum gun barrel lights up dramatically when the model fires thanks to an internal flashtube.

- A 7.92mm machine gun provides another firing option with light and sound, and has a movable flap.


- The front-mounted, pre-assembled gearbox powers the models via a pair of Type 380 motors.