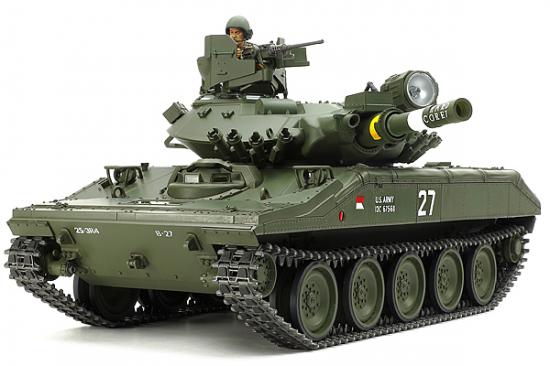 A Veteran Campaigner
The lightweight M551 Sheridan was designed as an airliftable tank, a cutting-edge design with aluminum alloy hull and powerful 152mm gun/launcher. Work began on it in 1959, and it was officially adopted in May 1966, with 1,600 produced by November 1970. Its first taste of live action came in the Vietnam War, fulfilling both shelling and offensive roles in a punishing environment, and it would also go on to serve in Panama and the Gulf War conflict. It remained in service with combat units until 1996, and was not withdrawn completely until 2004.


- The main gun barrel is moved via servo, and offers a range of motion from 5 degrees of depression to 15 degrees of elevation.


- Turret rotation is controlled via transmitter and can be stopped at will. The gun automatically rises to avoid contact with the hull rear.


- Clear parts and an orange LED provide realistic flashes as the gun fires, accompanied by authentic sound for a taste of drama.

- Another orange LED is employed to light up the coaxial M73 machine gun as it is fired, also in conjunction with realistic sound.


- This picture shows the big searchlight lit up by its LED. The searchlight can be lit up and extinguished by transmitter commands.


- At the rear of the vehicle, there are also lights recreating the Sheridan's taillights - when the model is braked, they double as brake lamps.

- A plethora of accessories are included, to give a truly authentic finish. Beneath the magnet-attached engine grille is the Control Unit.


- A commander figure is included in the kit for an extra level of realism. He is for installation at the M2 which is perched on the cupola.

- Rear mounted gearboxes have type 380 motors for power at any speed range, and facilitating a realistic range of turns, plus pivoting.


- In addition to an aluminum chassis, durable metal components are used for drive sprockets, idler arms, and the suspension arms.


- Suspension arm components are coil-sprung for smooth, realistic motion and the ability to take on seriously rough terrain.

- Gaining access to the battery is simple; just remove the left rear side panel! There is no need to take off the upper hull.


- The DMD T-11 control unit controls the drive motors, and coordinates lights and sounds with model action for an immersive experience.


- A 60mm bass reflex speaker with duct is installed in the lower hull for deep, rich sounds. Volume is adjustable via transmitter operation.