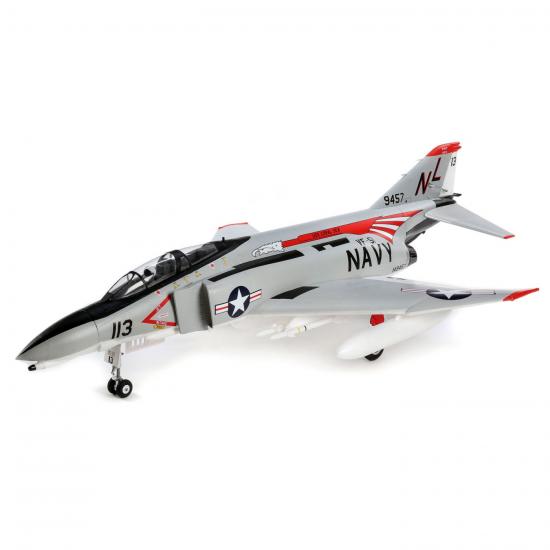 The McDonnell Douglas F-4 Phantom II is a legendary long-range supersonic interceptor and fighter-bomber that continues to serve in some countries more than 60 years after making its first flight. Capable of top speeds up to and even beyond Mach 2, the F-4 set numerous speed and altitude world records while serving the U.S. Navy, Marine Corps and Air Force. The E-flite® F-4 Phantom II 80mm EDF is an Extra Scale replica that delivers outstanding authenticity and incredible performance with fantastic handling- especially when it's equipped with exclusive Spektrum™ AS3X® and SAFE® Select technologies (BNF® Basic version only).

The E-flite® F-4 Phantom II 80mm EDF is a replica of the awe-inspiring supersonic interceptor and fighter-bomber legend. It features an accurate outline and an abundance of Extra Scale details including molded-in panel lines and hatches, main gear strut covers, removable ordnance and tanks, plus a factory-applied finish that pays tribute to the VF-51 "Screaming Eagles" squadron. Functional Extra Scale features include LED landing and navigation lights, full-flying stabs, operational flaps and control surfaces with pocket hinges, sequenced nose gear doors and electric retracts with shock-absorbing struts so you can fly off a variety of surfaces, including grass fields. The 6S-compatible brushless inrunner motor and 100-amp ESC are perfectly matched to an 80mm 12-blade fan to deliver incredible thrust and speed, plus a turbine-like sound. It's also the easiest to assemble Phantom ever with a factory-finished EPO airframe that bolts together- no glue required- in less time than it takes to charge a battery. And it all adds up to deliver a unique flight experience with the best handling and performing F-4 model yet!

The 12-blade 80mm fan, high-RPM brushless inrunner motor and 100-amp ESC combine with your 6S 4000–5000+mAh LiPo battery to deliver great vertical performance and a fantastic speed range with virtually instantaneous throttle response. This power system also delivers better performance and longer flight times than the 6S-compatible power systems used in larger EPO or even similar sized composite and wood models that were available in the past. But what makes the experience truly rewarding is the fantastic sound it produces- it's almost like a real turbine.

The steerable nose gear with dual wheels and the wide-spaced main gear feature reliable, factory-installed electric retracts equipped with durable metal components and shock-absorbing struts that make it possible to fly from a wider variety of surfaces including paved runways and even grass.

Construction with fully-molded EPO material makes it possible to replicate complex detail and shapes in a lightweight yet durable form. The result is an outstanding scale appearance that's easy to maintain and delivers the best possible flight experience, plus the factory-installed metal-geared servos with ball-link equipped linkages deliver crisp and precise control at every speed.

No glue is required for assembly and you can have the F-4 ready to fly in less time than it takes to charge a battery! The stabs plus the two-piece wing with an innovative hands-free connection system bolt into place and can easily be removed for convenient storage and transport.

The factory-applied paint and decal finish pays tribute to the VF-51 "Screaming Eagles" squadron, while providing excellent visibility and a model you'll be proud to show off everywhere you go.