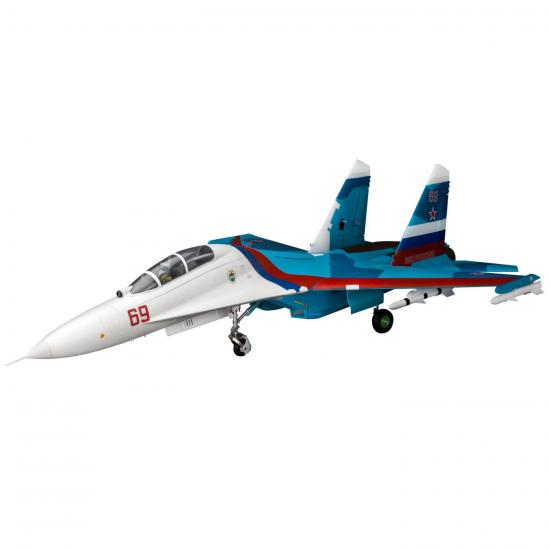 Developed by Russia's Sukhoi Aviation Corporation, the two-seat, twin-engine Su-30 multirole fighter improved on the Su-27 with greater operational range and the ability to support both air and ground attacks. The E-flite® Su-30 Twin 70mm EDF jet replicates this rarely modeled fighter in striking Extra Scale detail and offers unique flight characteristics and features. From its large size, functional air brake and highly-detailed retractable landing gear to the twin power system and the awesome turbine-like sound it delivers, this Su-30 is designed to impress. The model also features a unique Russian Falcons trim scheme that adds to the authenticity and in-flight visibility.

The E-flite® Su-30 Twin 70mm EDF jet replicates the seldom-modeled Sukhoi fighter with power, maneuverability, and Extra Scale details that all combine for a truly incomparable flying experience. With its twin EDF units running in sync, the Su-30 sounds like a giant-scale turbine-powered jet — and because of its impressively large size it flies like a big jet, too. The 12-blade 70mm fans feature brushless inrunner motors that are paired with 80A ESCs wired to use a single 6S 5000–7000mAh LiPo battery. This power system produces excellent top speed and vertical performance, while the factory-installed, metal-geared servos with ball-link equipped linkages deliver precise control. Functional Extra Scale features include a deployable air brake, LED landing and navigation lights, full-flying stabs, sequenced gear doors and electric retracts with shock-absorbing struts including a trailing-link nose gear so the Su-30 can be flown from a wide variety of surfaces. And a multitude of Extra Scale details make it a standout on the tarmac and in flight, including molded-in panel lines and hatches, removable optional-use ordnance, cockpit detail and a factory-applied finish with a unique high-visibility trim scheme.

Factory-installed LED navigation and landing lights, full-flying stabs and an operational air brake – even sequenced gear doors – are functional Extra Scale features that take your experience to another level.

Construction with fully molded EPO material makes it possible to replicate complex detail and shapes in a lightweight yet durable form. The result is an outstanding scale appearance that's easy to maintain and delivers the best possible flight experience. The factory-installed metal-geared servos with ball-link equipped linkages deliver crisp and precise control at every speed.

Final assembly can be completed in less time than it takes to charge the battery. The nose cone is magnetically secured and the wings are removable for convenient storage and transport.