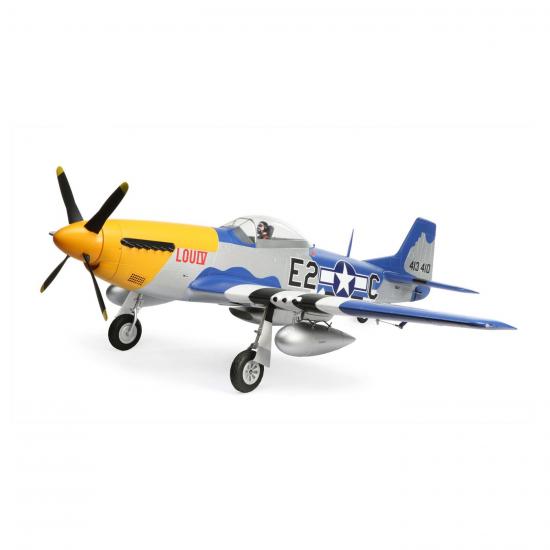 The P-51D Mustang 1.5m is the largest, most detailed and best performing replica of the legendary fighter from E-flite® yet! Along with an accurate outline, it also features an abundance of Extra Scale details including molded in panel lines and hatches, guns and removable drop tanks, plus a striking factory-applied “Lou IV” finish. Functional Extra Scale features include LED navigation lights, sequenced main and tailwheel gear doors, flaps and more. The shock-absorbing struts feature ball-bearing equipped wheels with diamond tread tires for added scale appearance and make it possible to fly from a variety of surfaces including grass, and reliable electric retracts operate the main gear and tailwheel. And at the heart of it all is a factory-installed brushless motor that’s compatible with 6S LiPo power—simply drop in a 6S 3200-7000mAh battery to achieve level flight speeds in excess of 80+ MPH and unlimited vertical performance! Both versions include a 100-amp Spektrum™ Avian™ Smart ESC, and the BNF® Basic version is also equipped with an AR637TA receiver that offers full-range telemetry including real-time battery voltage, current, temperature and more to compatible transmitters, plus the advantages of exclusive AS3X® and SAFE® Select technologies to make this one of the easiest to fly Mustangs ever. The unique 3-piece wing design makes transport and storage as convenient as possible because the center section includes the main gear and the outer panels simply snap into place securely without requiring fasteners. It’s also quick and easy to assemble because the factory-finished EPO airframe bolts together—no glue required—in less time than it takes to charge a battery. And it all adds up to deliver a warbird flying experience unlike any other with the mightiest Mustang yet!

The P-51D Mustang 1.5m features an accurate outline and an abundance of Extra Scale details including molded-in panel lines and hatches, guns and removable drop tanks—plus many more details than you typically find on similar class and smaller models.

The factory-installed power system features a 100-amp ESC plus a high-power brushless outrunner motor that works with the large-diameter four-blade propeller and a 6S 3200–7000mAh LiPo battery to deliver better-than-scale speed and unlimited vertical performance.

The P-51D Mustang 1.5m is equipped with an exclusive Spektrum™ Avian™ Smart ESC that can provide a variety of real-time power system related telemetry data including motor RPM, current, battery voltage and more via compatible receivers (including the AR637TA) and Spektrum AirWare™ equipped transmitters (including the DX6e and 8e, DX6 and 8 G2, the DX9, iX12 and others) while you fly.

The wide-spaced main gear feature reliable, factory-installed electric retracts equipped with durable metal components and shock-absorbing struts that make it possible to fly from a wider variety of surfaces including paved runways and grass. The main gear and the retractable tailwheel also feature sequenced gear doors for added scale function and appearance.

Construction with fully-molded EPO material makes it possible to replicate complex detail and shapes in a lightweight yet durable form. The result is an outstanding scale appearance that’s easy to maintain and delivers the best possible flight experience, plus the factory-installed servos with ball-link equipped linkages deliver crisp and precise control at every speed.

No glue is required for assembly and you can have the P-51D Mustang 1.5m ready to fly in less time than it takes to charge a battery! The 3-piece wing design makes transport and storage as practical and convenient as possible because the center section includes the main gear and the outer panels snap into place securely without fasteners.