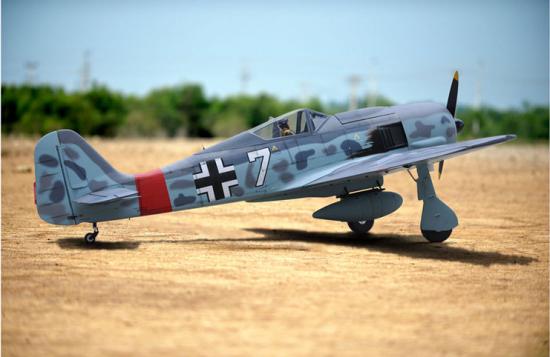 The Focke-Wulf Fw 190 is a German single-seat, single-engine fighter aircraft designed by Kurt Tank in the late 1930s and widely used during World War II. Along with its well-known counterpart, the Messerschmitt Bf 109, the Fw 190 became the backbone of the Luftwaffe's Jagdwaffe (Fighter Force). The twin-row BMW 801 radial engine that powered most operational versions enabled the Fw 190 to lift larger loads than the Bf 109, allowing its use as a day fighter, fighter-bomber, ground-attack aircraft and, to a lesser degree, night fighter.

Black Horse's model is scaled to approximately 1:4 and attention was paid to a true to original appearance and best flight characteristics. The model can be operated using an electric power system or with an IC engine of about 120cc displacement.

No product reviews yet!

All reviews are subject to moderation
x

Note: Price matches will only be considered against valid, in stock products in the UK. Although we can match 99% of prices, some exceptions will apply. Full Terms
x