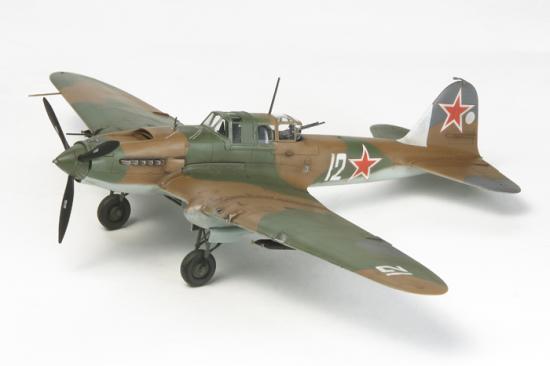 The Ilyushin Il-2 Shuturmovik was the Russian military s representative ground-attack aircraft during WWII. Over 36,000 examples were built by the end of the war, making it the most produced military aircraft in aviation history. The aircraft was characterized by armor that was integrated into its airframe to provide protection for vital areas such as the cockpit, engine, and fuel tank. Production of the single-seat version of the Il-2 began in March 1941 but severe losses led to the development of a two-seat version with a rear gunner. A version which featured outer wing sections swept back at 15 degrees for a better center of gravity was introduced in late- 1943. Together with the T-34 tank, the Il-2 contributed greatly to the eventual Russian victory.The Tamiya 1/72 aircraft model faithfully captures all the details of this historic aircraft. The Il2 is also available in 1/48 scale for those modelers who have extra display space in their war bird collection.