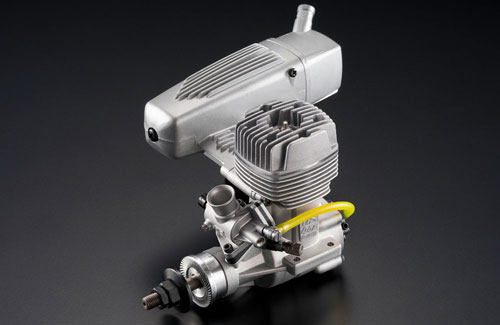 The O.S. GGT-15 uses the latest in model engine technology, it is a petrol engine that uses a glowplug!

This is a revotionary technology that is set to change model engines forever! It is not merely putting petrol in a methanol type of engine, It is a fundamental re-design from the ground up. The GGT series has taken years to develop and it has been through extensive testing before going into production.

Firstly, the layout and timing of the ports and transfers are completely different to a methanol engine. The shape of the combustion chamber is also very different, as is the compression ratio. This is to suit the fundamental differences between the fuels and the fuel air ratios that are burnt. Methanol has a wide tolerance to these ratios but petrol does not. Everything is far more critical and well suited to the OS high-precision and accuracy production techniques.A special G5 glowplug has also been developed to match all of the above, it is not just a re-badging exercise! There is way more to glowplug design than you would think. Gone is the unsighly spark plug and cap plus the expensive ignition unit with another battery that you have to charge.The timing of the crankshaft inlet port and its size are also different, which is to help maintain a high gas flow and throttle response.

The ratio of fuel to oil is more critical than a methanol engine. Petrol needs less oil to burn correctly, so the design of the lubrication process also has to change. The GGT series uses a roller big end bearing and plain little end. This needs a little more oil than a twin roller bearing setup, so it is recommended to stay at around 33:1 even after running in. The oil ratio and temperatures dictate the need for a ringed piston setup, which the GGT series has. The clearances inside the engine and the oil feeds are designed to suit the oil available. It puts enough in the right places and copes with the higher temperatures of burning petrol

Lastly, the carburation process has to be very precise with such low fuel air ratios. To do this, OS has adopted a pumped fueling sytem and a specially designed carburettor. This provides optimum fueling at all RPMs and attitudes.

Petrol is more volative than glow fuel which is why the regular tank presurising via the exhast is not appropriate. It also means that a starter is preferred to flicking, as the chance of premature firing is higher.

Lastly, have a think about the cost of a gallon of 10% methanol/nitro fuel and compare it to a gallon of regular petrol plus oil. You are looking at a reduction of up to 60%. Add the fact that the GGT-15 sips its fuel at less than 50% compared a methanol engine and the savings fast outweight the increased cost, let alone the flight time per tank!

Try the New GGT-15, its a revolution not an evolution.