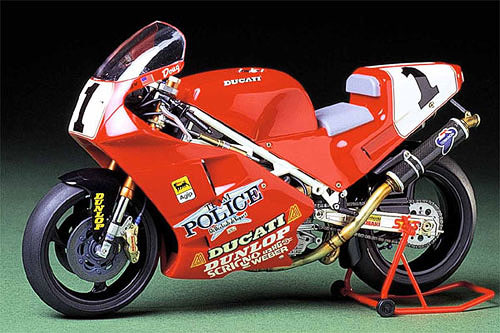 About the Ducati 888 Superbike Racer

On the 26th of September 1993, a young and inspiring motorcycle racer named Tetsuya Harada was adding the final touches to his machine at the Jarama racing circuit, just prior tot he last round of the season. This would make him the first Japanese World Champion since 1977. His closest rival, Loris Capirossi, was ahead in point standings going into this last race, but bad luck plagued him during the dynamic battle for the 250cc GP2 title. Although this was Harada's debut season for the World Grand Prix, he had been working closely with Yamaha for the last couple of seasons, perfecting the works TZM bike, which allowed him to win the 1992 All Japan Championship title. The 1993 Yamaha TZ250M used a 249cc liquid cooled V-twin cylinder engine capable of 94 horsepower. Its crankcase reed valve induction system was combined with an electronically controlled exhaust valve system. The highly sophisticated six-speed gear box used an electronic cut-out gear changing system that eliminated clutch operation and minimized racing stresses. This awesome powerplant was mounted on Yamaha's exceptionally rigid twin-spar box-section aluminum frame that was capable of head angle adjustments. The rear suspension was also of box-sectioned aluminum to withstand the enormous power and traction. The bike rides on Marchesini cast magnesium wheels matched to Dunlop radial tires. The superb stopping power was achieved by front Brembo and rear Nissin Brake systems.